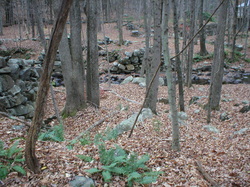 History:  The mill was constructed as a saw mill in the early 1800s. The mill was used for a variety of purposes over the years and was known as being one of the first woolen mills in the state producing spool thread. Kellogg & Gould operated the mill in Tinkerville and by 1830 the mill was manufacturing woolen goods. In 1847 a fire destroyed the woolen mill. A silk mill was then established on the old woolen mill site.  In 1869 it was operating as a thread mill. Spools for the thread were never manufactured there, but were imported from Massachusetts. The reasons for importing from out of state are unknown as there were significant spool manufacturing locally and in Connecticut. Palm leaf hats and lumber for plow beams were made in Tinkerville. However, the location and time period could not be confirmed. A number of fires at the mill complex were reported over the years without reference to specific buildings. This may have been partially responsible for the demise of the manufacturing activity. In 1887, the Forest mill was sold at auction. The notice of auction indicated that it consisted of a three story mill, 50 x 30 feet; a grist mill; a store; containing eight acres of land; and being equipped with water power. The building contained machinery from thread winding, spool finisher and wood lathes according to the Tolland County Press. The estate was reported in “Demers History of Willington” to be that of Origin Dimock At this writing, additional information has been located that may be used to flesh out more on the activity in Tinkerville. It will be added when verified.

Site Characteristics: It is on the Fenton River on the southerly side of Tinkerville Road in the valley where the road runs in an east west direction between Fermier Road on the west to Lustig Road on the east and just westerly of where the Fenton River passes under Tinkerville Road. Two dams were located just downstream from the bridge at Tinkerville Road with the elongated ponds running parallel to the road. Two ponds operated in tandem to provide water to power the mill. The upstream pond fed a 550 foot sluiceway to the mill site which was located at the downstream dam.

At least two buildings were located at the dam site on the southerly side of the river. Originating from the upstream dam was a 550 foot sluiceway that transported water to the larger of two mill buildings making a 90 degree turn under the mill. It entered under the mill building near the center of the building to turn a water wheel, most likely an undershot wheel, before flowing to a short tail race and back to the Fenton River. A second wheel, most likely an overshot wheel, was located on the south side of the river adjacent to the lower side of the dam. A number of building foundation remnants were noted on site with insufficient evidence to determine the total number of buildings.