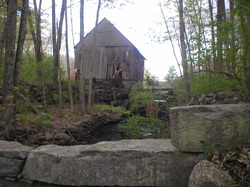 Additional Purposes: Currently a fishing pond
History: Donkeyville is an old industrial mill complex near the Coventry Town line on the Skungamaug River. It was a significant manufacturing village that was constructed in the early 1800s and was one of the largest mills sites in Tolland In 1857 the mill was known as Fuller’s Thread Mill and in 1869 as Underwood & Hastings Cotton Mill where candle wicking and woolen and cotton goods such as blankets were manufactured. Donkeyville got its name from the shoddy or raw cotton that was hauled to the mill by donkeys. The mill burned down in 1875. Turbine power was added later to a power house to generate electricity for the Weigold home on Weigold Road. It operated until 1957.

Site Characteristics: The mill consisted of a number of small buildings, originally served with an overshot wheel and most likely an undershot wheel also. Only remnants remain of the mill buildings, the tail and head races, and other characteristics of the original mill site. The mill’s overshot wheel disappeared long ago. Today a small building and the turbine to provide power an electric generator on the west side of the dam remains in place. The mill is on an off- stream site where water was diverted from the main Skungamaug River to an off-stream pond where multiple dams maintained the water level for powering the mills and later generating electric power.