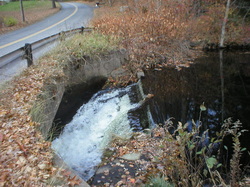 History – This was the first grist mill in Tolland owned by Samuel Lamb in 1723. A miller named Sumner, for whom the mill is named, purchased the lowland property above and below Anderson Road along with Skungamaug Lake now known as Tolland Marsh. He built a dirt dam with stone retaining walls clear across the valley just above the current location of Anderson Road.  Components of the mill dam included: three water control structures, probably of wood; a spillway to carry the stream flow through the dam; a gated open penstock that carried water across what is now Anderson Road to the overshot water wheel in the mill; and a third water control and spillway structure at the southerly end of the dam. The latter was so designed that when all the flashboards were removed, it dried out the penstock so that work on the wheel and penstock could be accomplished under dry conditions.

It 1850 it operated as a saw mill and shingle mill according to the 1850 business census. A saw mill owned by Leverett Luce later occupied the site operating it into the 1900s.  The saw mill operated until 1925 by Anderson. The mill was later taken down for safety reasons. In the early to mid-1930s, new owner Frank Colombaro installed a small turbine powered generator for electric power. Generation of electricity was one of the last functions of the mill site.

The mill was described by Lyle Thorpe, owner of the site until his death, as “a big, three story mill, and operated with a very large overshot wheel and a vertical whipsaw.” It was used for grinding grain, sawing timber, manufacturing shingles, producing cloth boards, processing a variety of wood products, and generating electricity.

Site Characteristics: The site is located just south of the current location of Anderson Road on the Skungamaug River. Just north of the present Anderson Road was a dam that formed Sumner Pond which drew upon the large quantity of water stored in the Skungamaug Lake, now known as Tolland Marsh, to maintain an abundant supply of water to power a variety of mill operations. A smaller dam was used for the generation of electricity

Sumner Mill Pond created by the dam had a surface area of about 20 acres with useful water storage of about three feet. When the pond was stored at its maximum legal level, about one foot of water was stored in the marsh that was over 100 acres in area creating a considerable supply of a dependable source of power, more than enough to run the mill. There were about 160 acre-feet of water that was available to the mill. By the standards of the time, the site was ideal for a large mill to work long hours even during dry periods.

While the official State name of the pond is Sumner Pond, today it is best known as Thorpe’s Pond by local residents. Little evidence of the mill operation exists today as only a few stone foundation sections remain. Also remaining on the south side of Anderson Road is a small mill building that housed the generator and a small table saw.