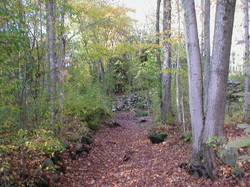 Mill type: Saw, shingle, furniture
History: Commonly known as Mason’s mill, it was it was constructed by Zebulon Gurley circa 1778 who was the first miller. The mill was purchased by John Chauncy Mason in 1864. It was operated as a saw mill from 1778 to 1938. It operated as a shingle, furniture, and grist mill from 1864 to 1929. The last full time miller was Charles Mason whose name is most recognized as being associated with the mill. This in part was due to the law suit filed against James Hoyle owner and operator of the Daleville mill in Willington who was storing Fenton River water for his own use to the detriment of the operation to mill owners downstream in Mansfield. Mason was joined by Emory B. Smith, and William W. Williams who also operated mills on the Fenton River in Mansfield. The landmark water rights suit was won by Mason.

The saw mill used an up and down type saw. Unlike most saw mills that converted to circular saws after 1840, Mason’s mill operated the up and down saw until the mill was closed in the 1950s. The up and down saw mill equipment was sold to the Smithsonian Institute in 1963, and the mill was dismantled circa 1965. There is public access to the site as it is owned by Joshua’s Trust since 2000.

Site Characteristics: The mill dam was located just north of Old Turnpike Road across the Fenton River with two interconnected mill building on the east side of the Fenton River. A sluiceway directed water to the mill from a point upstream of the dam. Remnants of the dam, head race, mill building foundation, and a channel serving as a tail race can be viewed today.