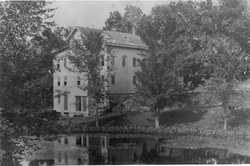 History: The Mansfield Organ Pipe Works had its beginning when brothers Erastus and Selden McCollum built a church organ in their barn in Rockville, Connecticut while specializing in the manufacturing of wood and metal organ pipes. Assisted by Erastus’ sons, Julian and Henry, they built a reputation for their quality products.

Fenelon C. McCollum or (Felon as used by his descendants) entered the business manufacturing wooden pipe organs and pedals in 1871 and started an independent business. In 1874 he moved to a mill building in the Merrow section of Mansfield. In1876 the business was move to leased space in the Brigham paper mill in the Mansfield Depot, and organized under the Mansfield Organ Pipe Works. By 1881 he was occupying the entire building and then in 1889, Felelon purchased the mill site including the large mill building, support buildings, a saw mill, and all the water rights and improvements required to power the mill. He managed the company from 1889 until 1925. In 1892 he replaced the mill with a larger four story mill which burned down in 1896. It was replaced quickly and with state of the art equipment. He invented the metal-toed wooden pipe foot and patented it in 1890. The Felelon mill provided employment for 20 workers, developed new mass production techniques, and developed many patents. After the 1920s, the company concentrated on pipe feet and small organ parts. The company remained the sole manufacturer of metal-toed organ pipe feet in the world until around 1979.

Site Characteristics: The mill complex was located south of Route 44, Boston Turnpike. A large channel diverted water from the Willimantic River about 400 feet north of the highway, passed under the highway, and continued in a southerly direction about 250 to 300 feet to the mill site. Sometime during the replacement of the original mill or after the mill was destroyed by fire, an undershot water wheel was replaced by a turbine. With the conversion to a turbine, additional holding ponds and control mechanisms were added to the site. The turbine transmitted power to the mill and to a smaller saw mill building by turning a 150 rod. Unique to the site was the transmission of power to the mii. The rod from the turbine connected to the mill at a 45 degree angle rather than the usual perpendicular direction.