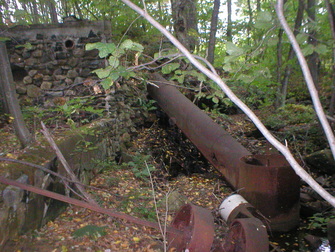 Mill type: Saw, grist, cider, and spool mill. It was a source of ice until the 1940s
History: The mill was constructed in the late 1700s to early 1800s. Asa Brooks operated a saw and grist mill during the 1850s. His family continued to operate the mill and another mill down stream into the 1900s. Adino Brooks operated the downstream mill.

Site Characteristics:  The source of water to power the mill was from Brooks’ Pond, now known as Johnson’s Pond. Water through a wooden sluiceway was directed to an overshot wheel. Later the water wheel was replaced with a turbine. Due to the destruction of the lower mill site its source of power remains in question. Remnants of the turbine at the upper site remain today. Unique to the site are the remnants of a lower dam serving the Adino Brook’s mill. The dam supporting a small pond, under an acre in size, was constructed in almost a perfect semi-circle.