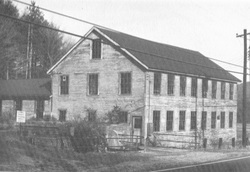 History: The Amidon mill was one of the more well-known mills in Willington continuing operations into the 1960s.  The East Willington or Willington Hollow District centered on the C. S. Amidon mill had a number of businesses including a tannery, shoe factory, comb shop, a furniture factory, wagon shop, shop for making plow handles and baseball bats, a button mill, and a blacksmith shop for the manufacturing of tools. Saw mills and the manufacturing of saw mill equipment were major activities of C. S. Amidon. Amidon’s saw mill equipment was known as some of the best in the Country.

The date of original construction could not be verified, but a number of mills preceded the Amidon mill dating back to the early to mid 1700s. Amidon was known to have ties with three other mill sites on the Fenton River both north and south of Route 74 and possibly one upstream from the main Amidon mill on Georges Brook. With the exception of the main mill, all the documented factory activity and millers operating in the Hollow could not be placed to a specific site.  What is known is that all three dams adjacent to the main mill could not be named, but all three were on property once owned by Charles F. Amidon. A number of owners and operators were involved in these sites before the Amidons. At this writing the names of the mill owners are still being identified.

Site Characteristics, Main Mill: The site now consists of one mill building. An on-stream mill, water is diverted from the pond through a pipe under the building to a C.P. Bradway turbine with a tail race discharging water back to the brook from the street side of the building. 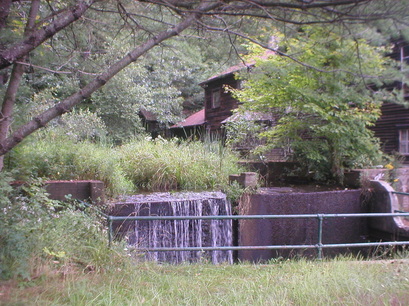 Amidon mill, dam, spillway, and mill pomd
The next mill dam site is about 950 feet north of Route 74. The dam is a low head dam and forms a rather small pond above. This dam is oriented in an east west direction with remnants of an old mill site on the east side of the dam. The nature of the configuration is indicative that the dam was a low head dam so the water wheel most likely would have been of the undershot type. The dam also provided additional storage for another mill site about 300 feet down stream which was more heavily developed for mill activity.

This second mill dam site is about 600 feet north of Route 74. The dam is a long stone dam running in an east west direction across the river. The dam has been breached on the east side of the river, in the main river channel, so there is no water retention area or pond above. In the middle of the dam is a long spillway which is still in remarkable condition. A review of the site revealed a number of possible mill sites but nothing definitive was found due to the extent of breaching and growth of vegetation. On the upper westerly side of the valley was an old saw mill site which was most probably a portable site and one of Amidon’s saw mills. The area where the spillway was located is the more shallow part of the earlier pond. 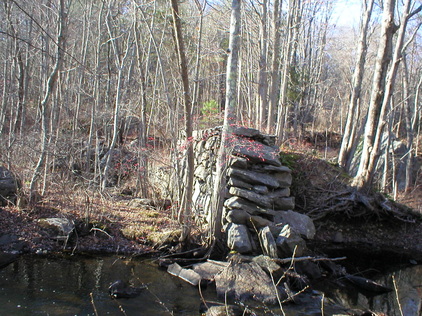 Breached dam looking west at spillway - second mill dam
The third mill dam is about 450 feet south of Route 74. A small dam about six to eight feet high has been totally breached. On the west bank was a short head race that went to a wheel pit perpendicular to the river. The tail race made a 90 degree turn into a stone lined eight foot wide troth or tail race that extended about 250 feet parallel to the river before it returned to the river. A definitive conclusion could not be made as to whether a standard wheel, a turbine, or both were used at the site. The characteristics of the race were most unusual defying explanation. One explanation for the tail race was that it may have served another water wheel and if so, an undershot type wheel. Near the end of the race was foundation type stone work that may have supported one or two mill buildings. Definitive conclusions could not be reached due to the extent of flood damage over the years. The long stone lined race was not needed and the tail race could have been relatively short had another wheel not been utilized. Recent data indicated that the mill may have been Brown’s Mill, but this still must be verified.
A fourth mill dam that may have been operated by the Amidons is discussed under the “Button Factory/Saw Mill.”