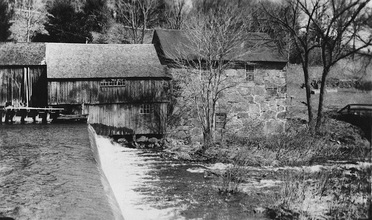 History: The mill was constructed as a saw mill in the 1720s and operated by its  first owner, Benjamin Davis after purchasing the property in 1722. A grist mill was added circa 1750. A wooden grist mill was replaced with a stone building in 1830s. It operated until 1941 grinding corn, rye, barley and wheat. The attached saw mill collapsed in a heavy snow in the early 1950s and the dam was washed out in the winter of 1958-59. The grist mill was owned or operated by number of well known millers including Ephriam Gurley, Joseph Conant, Lucius Gurley, Meneely Hanks, Benjamin Hanks, and Anthony Duda. It is owned by Joshua’s Trust (1979) and is open to the public on a seasonal basis.

Site Characteristics: The stone grist mill, located on the east side of the Fenton River is currently used as a museum. Just upstream and attached to the stone mill was the original grist mill. The dam serving the mill was located just upstream from the existing stone mill building. It was about ten feet high with a spillway on the west side. The grist mill was powered by an undershot wheel and circa 1875 the grist mill was converted to turbine power. A short tail race on the east side of the river directed water to the wheel.
​
Additional Sources of Information: Joshua’s Trust web site -
http://joshuastrust.org/gurleyville-gristmill
“Joshua’s Track Walk Book, Joshua’s Tract Conservation and Historic Trust, Fourth Edition, page 102
“Chronology of Mansfield, Connecticut, 1702 – 2002,” Mansfield Historical Society, 2003