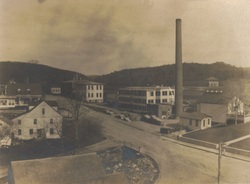 Mill type: Saw, grist, thread mill
History: The site of Hall’s Mill initially supported a saw and grist mill in the early 1700s. The mill as it exists today was built in the early 1800s. By 1830 wool processing was in full swing with Johnson and Phillips manufacturing woolen goods. In 1840 the Willington Thread Company was organized by Elisha Johnson, Otis Dimock and Origin Hall. This was the forerunner to the Gardiner Hall Jr. Co.

In 1848, Gardiner Hall, Sr. built a factory in South Willington for making cotton wadding and batting. In 1850, Hall, Sr. formed partnership with Timothy Merrick and Elisha Johnson under name of Hall, Merrick and Johnson and converted the cotton wadding mill into a thread factory. The factory closed in the 1857 depression. In 1860, Gardiner Hall’s son returned and began a spool cotton thread company, the Hall Thread Co., but it failed a year later.

In 1861 “Gardiner Hall, Jr. designed a thread dressing machine and by 1862 Gardiner Hall, Jr. established a successful thread mill manufacturing spool cotton thread. He added a spool manufacturing business in 1864. In 1868, the dye house containing blocks for making spools was destroyed by fire and in 1869 floods destroyed two dams at the Thread mill. In 1870, Gardiner Hall, Jr., being an innovator in the thread industry, invented and patented the automatic spool printing press for imprinting labels at both ends of the spools at once. In 1879 he invented and patented a tension regulator which took thread off spools without turning them.

By 1876, the Hall Company began erecting several dwelling houses which ultimately formed the mill community of South Willington. By 1883 Hall and Co. completed a barn later occupied by Jury’s Tavern until it was destroyed by fire in 1982.

In 1896, Mr. Perry from New London, CT constructed an ice house near the railroad depot in South Willington utilizing Hall’s Pond as an ice source. As an innovator, Hall ordered an ingenious 2,760 ice chute to facilitate moving 300 pound cakes of ice from its Hall’s Pond source to the ice house. The ice house was a large building storing up to 6,000 tons of ice waiting transport by rail. In 1897, a blacksmith shop and ash house was built at the mill site. The Millworks consisting of the mill buildings on the upper part of the mill site and owned by the Buccino family was vote to the Connecticut State Register of Historic Places on March 5, 2013..

Site Characteristics: For water power, the mill relied on Hall’s Pond, earlier known as Lake Beauty (Lake Beautiful) and Lake Congerhale. The water from Hall’s Pond powered overshot, breastshot, and turbine water wheels. Unique to the mill is the fact that there is no emergency spillway separate and distinct from the head and tail race as had been the case in earlier years. All water leaving the pond flows through the race but could bypass the power equipment. There were two sluiceways or head races, one serving the north part of the site and the second servicing the lower thread mill building. The race from the dye house and previously from a water wheel travels behind the building; making roughly a 90 degree turn at the south end of the complex; goes under the blacksmith shop, Route 32, the existing South Willington Fire Station, and Depot Road; and then travels some 1,200 feet where it discharges into the Willimantic River. This serves as an emergency spillway. The tail race from a turbine located in the thread mill building, parallels the main tail race on the westerly side until it joins with the main tail race under the blacksmith shop, the most southerly building in the complex.